I’m pretty new to the world of motorsports journalism. I’ve been following Formula 1 and the BTCC for as long as I can remember, and I’ve made countless videos and forum posts about them both.

I’d been to dozens of BTCC events and had even been lucky enough to wander the pitlanes and paddocks as a child.

But it wasn’t until Brands Hatch a couple of weeks ago that I experienced a BTCC race weekend from a journalist’s point of view. I expected the bigger teams and drivers to be harder to access, and I wasn’t wrong. Myself and a colleague lost count of the times we were shrugged off by a certain top BTCC driver; but I guess he’s a busy guy.

Despite this, I had a successful weekend and was able to get great interviews with a number of good drivers. They were always friendly, but there was also an air of tension about most encounters. Not because of the interviewer, but just because of the situation. For the most part, BTCC drivers are sitting on the edge of a financial cliff. Every race counts in terms of proving their worth to sponsors. After each race, they count up the cost of every bump, scrape, and worse. They love what they do, but it’s an incredible sacrifice to do it.

This weekend I went to the opposite end of the scale. This weekend I have been covering the British Endurance Championship, a series of three-hour races contested by mostly older-spec GT3 machinery. 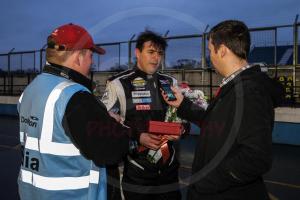 The teams turn up with large transporters and modest caravans. They have barbecues and tables dedicated to finger food. The drivers’ families sit under awnings enjoying the British weather and the competitive racing. And at the end of the day, all the drivers congratulate each other on a job well-done and chat about their experiences throughout the day.

As a journalist, each driver and team is always willing to have a chat, and it’s just a pleasure to speak to drivers who are here to win, but also to enjoy the experience. It’s akin to a festival atmosphere but with a stronger smell of racing fuel and burning rubber.

I loved both of my experiences, but for different reasons. The BTCC is intense action performed by drivers under pressure. Britcar is a long race contested by competitive amateurs, enthusiasts and professionals on their days off.