During the last US Election, I was in London watching a recording of ‘Later with Jools Holland’. While I really enjoyed my time there, I also definitely felt like I was missing something. This time around, I’m fully-immersing myself in the radio side of things; listening to Radio 5Live. I’m a radio man, after all.

But with that said, as a journalist I have a responsibility to check out what the TV is saying as well, and as a technophile I want to see how the complicated election data is presented.

Here in the UK, the two main news channels, BBC News and Sky News, are constantly trying to out-do each other with their graphics and some of the ridiculous set-pieces in previous years have been laughable.

So, this time around, I’m going to be taking a look at the various graphics and technology employed by the BBC and Sky, and see who comes out on-top.

Both the BBC and Sky have employed their biggest studios possible. Both of the broadcasters are using giant, curved screens as backdrops. But the way the screens are actually used is slightly different, and the BBC has some extra gadgetry to try and stand out from the crowd.

Sky has put all of its eggs in one basket: the back wall of their studio is their one and only way of displaying dedicated election stats. They overlay other stats during VTs and live interviews 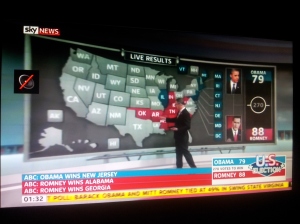 but this is their primary system to turning stats into graphics. The system runs extremly smoothly and is operated by the presenter using an iPad which is attached to his/her hand. This is a departure from Sky’s infamous ‘SkyPad’ which often makes appearances during sports coverage.

With the presenter controlling the screen with the iPad attached to his hand, it does make the presentation seem a little more smooth, but it does also mean you get a couple of seconds of the presenter looking down and tapping on his iPad, and the viewer can’t see what’s happening.

This year, the BBC has their own SkyPad. It’s effectively a giant touch-screen computer, with all the buttons and controls on display for the presenter and the viewer. I personally don’t think this is necessary for the normal viewer – seeing the same controls that the presenter sees gives the presentation a ‘behind-the-scenes’ feel that really isn’t necessary for this sort of coverage. I personally like it, but I think that’s my inner geek saying ‘ooh, seeing the User-interface is interesting.’ 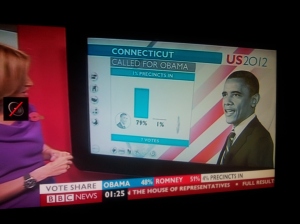 isn’t necessary in coverage like this. On the other hand, having the controls on-screen does allow the presenter to go to whatever page they want to on-the-fly, which is useful when there is breaking election news to report. The main menu of the device is a list of states, and when clicked on, even greater detail can be accessed on each state. It’s good stuff for a curious user, but not perfect for TV.

In terms of the BBC’s giant screen offering, we have the presenter walking around quite a lot more, and a lot more camera movement as well. In addition, there are multiple cameras floating around, going for close-ups of the graphics on the screen or the graphics floating in mid-air. The floating graphics are all well and good, but in general their potential is not realised. I don’t really feel like seeing a couple of bar graphs in the middle of the floor adds much to the presentation. With that said, there have been some gigantic line-graphs that 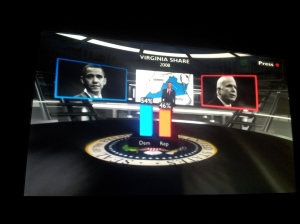 looked quite good in the middle of the floor. I find it interesting that Sky has refused to do floating graphics in their presentation, but I can see why. It appears less patronising, less kindergarten and a bit more professional to see the data up on a screen. Gimmicks aren’t necessary for things like this – if you’re up at 0230 then you probably don’t need to be shown stats in 3D.

So, overall, in terms of presentation techniques, Sky wins in my book. Obviously, graphical presentations aren’t the most important part of this kind of coverage; the actual journalism and the guests and the theatre is just as important. But I’m not really the person to judge that kind of stuff, especially not at 3am on a Wednesday morning.

One thought on “US Election Graphics – BBC News vs Sky News”